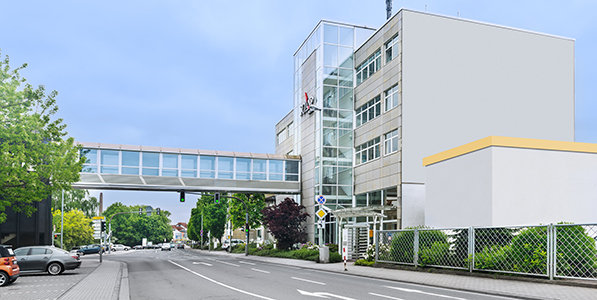 The following is a description how you find your direct and fastet way to Hofheim.

Arriving by car you can park at the Visitor´s Car Park, right next to the reception.

Should you travel by train, go to the lower-level S-Bahn Station at Frankfurt main station, take the S-2 commuter train (in direction Niedernhausen).
Leaving the train station in Hofheim, turn right, our factory beginsafter 300 m, along Hattersheimer Strasse.

Once you see the footbridge, passing over Hattersheimer Strasse, you have reached your destination. We are looking forward to your visit!

Autobahn A5 coming from the direction of Kassel
Go until Nordwestkreuz Frankfurt and exit there onto the A66 in direction of Wiesbaden.

Autobahn A3 coming from the direction of Köln (Cologne)
Go until Wiesbadener Kreuz, exit there onto the A66 in direction Frankfurt.
Alternative: Take Exit 46 Wiesbaden/Niedernhausen.

Autobahn A3 coming from the direction of Würzburg or on A5 Karlsruhe
Go until Frankfurter Kreuz and from there, onto B43, follow the Airport signs until Exit Hofheim (blue Autobahn sign). Follow Autobahn in direction of Hofheim and exit at Hofheim-Nord onto A66, direction Frankfurt. Stay in the right lane and take the next Exit Zeilsheim/Hofheim).

Autobahn A66 from the direction of Frankfurt
Continue to Exit 14, Zeilsheim and turn onto L3018 direction of Hofheim.

From the Airport
Follow Autobahn in direction of Hofheim and exit at Hofheim-Nord onto A66, direction Frankfurt to Exit 14 (Zeislheim/Hofheim). Get into left lane and follow L3018 direction Hofheim.

From Exit 46
At the end of the exit lane turn left and immediately right (underpass traffic light). Take direction to Eppstein (B455) until junction Hofheim, turn right and continue through Lorsbach to Hofheim (L3011). In Hofheim turn right, pass the train station and continue into Hattersheimer Strasse to the POLAR footbridge. Visitor Car Park on your left.

From Exit 11
Continue on B519 (Rheingaustrasse) to Hofheim. Pass the bridge over the railroad, turn right, pass the train station and continue into Hattersheimer Strasse to the POLAR footbridge. Visitor Car Park on your left.

From Exit 12
Take a left turn in the direction of Kriftel/Hofheim on L3011, go past the traffic light (Commercial Area) and continue to the next traffic light, turn right (railway underpass) follow the main road (Kapellenstrasse) to Hattersheimer Strasse in Hofheim. Visitor Car Park immediately after the POLAR footbridge, on your right.

From Exit 14
Turn right onto L3018 to Hofheim until traffic light at Aral gas station. Get into the left lane and turn into Schmelzweg, at the end turn right into Hattersheimer Strasse. Immediately after the POLAR footbridge, Visitor Car Park on your right.

The factory premises are extended between Hattersheimer Strasse and the railroad tracks (Frankfurt, Niedernhausen/Limburg), as well as the parallel running by-pass L3011 (Vinzenzstrasse).
The entrance to the reception is at the side of the Car Park, directly under the POLAR footbridge.