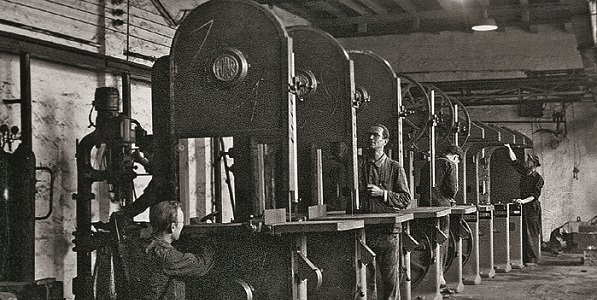 A long company history is proof for many right decisions

MOHR is a brand of the Adolf Mohr Maschinenfabrik:

Adolf Mohr Maschinenfabrik (machine factory) was founded in 1906 developing from a mechanical workshop. The family´s forefathers had been blacksmiths. Since that time the company has not only changed its line of products, but also developed from a regional supplier to the largest global supplier of cutting machines.

From the first days after the company was established on 24 September, up to the Second World War the factory had built machines for the regional timber industry in the Taunus area. Adolf Mohr was granted several patents for wood and metal working machines.

Since the better known cutting machine manufacturers of that time were all based in the eastern part of Germany, there was no such supplier in Western Germany after the war. Karl and Rudolf Mohr used their connections to the graphic trade, made the most of this unique opportunity and started to develop cutters.

Opening of the POLAR Service Center (PSC) which provides a highly efficient warehouse and dispatch system.

Product launch of three-side trimmer BC 330

Mohr-Shop: Consumables and accessories for cutting

Automation of the cutting process

Drupa 2020 is cancelled due to the Corona pandemic. Other trade fairs will follow. The next Drupa will take place in 2024.