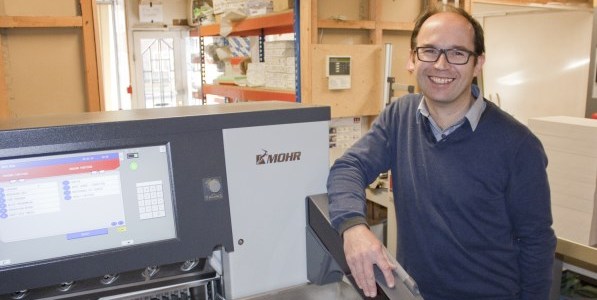 You are here: MOHR Postpress  >  Reports

The name Print and Copy Centre will conjure up an image of a typical high street printer, and at a look at the company’s walk-in store front on Cleethorpes Road in Grimsby would quickly confirm that impression to the visitor – but if they were to look past the counter and behind the scenes, a different story would emerge.

“We started out in 1989 as a straightforward high street copy shop,” says Robert Melton, who runs the company as Joint MD alongside his wife, Dawn. “I learned my trade working with my father, who ran a similar enterprise in Lincoln. We have changed a lot since then - while we still take on plenty of walk-in work from the public, we have found that diversification is the key to growth.”
This philosophy is reflected in the development of the local area. Traditionally dependent on the fishing industry, Grimsby is now a centre for some truly cutting edge technology, notably in the chemical and process industries, and more recently in renewable energy. The area’s seas are becoming one of the UK’s foremost wind power zones, with three major wind farms in operation, two more under construction and a further six being planned – and the turbines are assembled locally.  “We have gained a lot of work from these new industries, and others within the area both large and small, to the extent that we can now call ourselves a commercial business-to-business printer,” says Mr Melton.

A more diverse clientele has meant investment in a wider range of printing equipment, as the company strives both to offer a comprehensive service and retain as much work as possible in-house.  “We need to be able to adapt to market conditions - in plain terms that means that when a customer asks if we can do something, we need to be able to say yes,” says Mr Melton. “It’s important to keep up investment in our business and widen our capability at every opportunity.” To this end, the company’s array of copiers has been joined by two litho presses, three wide format plotters and an expanding finishing section.

The Challenge
“In order to keep turnover up, you have to do more than offer a diverse range of products,” says Mr Melton. “It’s a highly competitive world out there, and without offering both quality and productivity we would not survive.” It was in these two areas that the company’s guillotine was creating a finishing headache.

“We bought a budget machine three years ago which turned out to be a false economy,” explains Mr Melton. “The quality was occasionally a problem because the accuracy wasn’t always up to scratch, but the main problem was reliability. We had repeated breakdowns, and the engineer who kept coming to fix it told us we must have been using it too much! We are on a single shift, 8 till 5, and during this time the machine was probably only running 50% of the time – which didn’t seem excessive. After the fourth clamp break we decided enough was enough, we were getting tired of apologising to our customers. It was time to look for a more reliable guillotine.”
Not wishing to make the same mistake twice, Mr Melton canvassed opinion from the trade on the most reliable, high quality guillotines on the market. “The names Polar and Mohr were recommended – and since they have the same manufacturer we realised that apart from the details we had found our solution.”

The Solution
Mohr guillotines are durable state of the art programmable cutting machines available in 56, 66 and 80cm cut widths. Buyers can choose from a standard ECO model to a more advanced NET version offering a colour touch screen control and higher levels of programmability.

“We had a choice of sources for a Mohr machine, but we had reasons to choose Watkiss,” says Mr Melton. “They came across as being genuinely interested in helping us, while their competitors just seemed to want our money. They offered us an attractive deal and warranty, but we were also swayed by the level of after sales care they offer. We don’t think we will need them often – that’s the whole point – but we are confident they will be there if we do.”

Print and Copy Centre opted for a Mohr 66 NET machine. “There were plenty of attractions on this model offering improvements on its predecessor, from a bigger table to a far superior optical line cutting indicator, plus the software and control elements were in another league,” says Mr Melton.
The Result
Mr Melton says that once the decision was made to buy the Mohr, Watkiss moved extremely quickly. “It took two weeks from signing the order to having the machine installed,” he says. “When it arrived, even when it was in pieces you could tell straight away it was a well engineered machine. Our staff liked it straight away and training only took two days!”
The Mohr machine has had a real impact on the company’s workflow, says Mr Melton. “Downtime is a thing of the past, each cut is straight and accurate, and this machine offers much greater productivity. For instance we can cut paper stacks which are around a third bigger than previously, the backgauge is faster so time has been shaved off the cutting process, and the information storage capacity means we can recall job settings instantly for repeat work.”

“The Mohr also gives us the option of fast setup via barcode scanning. We can also network this machine as part of an automated workflow – we’re not ready to do this until we have similar systems elsewhere in the print room, but it’s good to have an eye on the future and install a machine which has that option.”
Print and Copy Centre’s attention to quality and productivity through prudent investment has paid off, with a 15% increase in turnover in the past year to just above the half million mark.  “We like buying equipment,” says Mr Melton, “but it’s always well thought out, we have to justify every penny and get a return on our investment.”
The Mohr range of guillotines has been available from Watkiss since August 2012 and is available in three different sizes: 56cm, 66cm and 80cm; each of which is available in two different versions, the ECO and NET. All feature a wide range of programming options, easy knife changing, a machine frame with optimized stability to guarantee maximum cutting precision and Direct Positioning System for greatest cutting accuracy. The ECO models are robust, programmable cutters with hydraulic drive and 5.5“ monochrome display.  The NET models are designed for integration into the digital workflow with 18.5” touch-screen display, barcode reader, Compucut® and process visualisation.